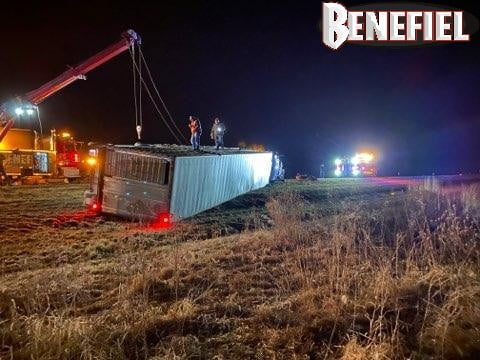 Benefiel’s heavy towing team responded to a call from the Missouri Highway Patrol. A cattle truck was driving down the I-29 N when the driver suddenly lost control of his vehicle by mile marker 113. Unfortunately, by the time the vehicle came to a complete stop, it was rolled over in a ditch by the side of the interstate.

Although it was 12:30 AM and traffic was not an issue, accidents such as this one can often take hours to clean-up! After receiving a detailed briefing from dispatch, the Benefiel team showed up prepared with two heavy duty rotators and one integrated wrecker. Not wanting to close the interstate for too long, the towing team carefully set up the rigging by the side of the road. Once everything was ready, they gave the Missouri Highway Patrol the okay to close the interstate.

Benefiel’s team made quick work of uprighting the truck. In total, the I-29 was closed for only 11 minutes! Now that the trailer was upright, the team had a massive task to tackle. And by massive we mean 75 cows weighing upwards of 500 lb each! Now, we don’t know about you but one of the last places we would want to take care of livestock is by the side of an interstate in the middle of the night!

For the safety of everyone concerned, the team towed the loaded trailer to their secure yard. Once there, they were able to carefully unload the cows into a new cattle trailer. While 25 cows perished in the accident, Benefiel’s heavy towing team was able to save the remaining 50.

This is one job that the towing team definitely won’t forget! Keep up the good work; you did a moorific job! (Apologies, we had to include at least one cow pun.)

Details of Heavy Towing Team Called Out for Midnight Rollover

The interstate was closed for a total of 11 minutes while the team uprighted the trailer using 2 rotators and an integrated wrecker. The heavy duty towing team then towed the trailer to the Benefiel yard in Rockport where an empty cattle trailer was waiting. The team offloaded the surviving 50 cows to the new trailer.

Since 1955, Benefiel Truck Repair & Towing has been passed down through generations of family ownership. You can count on our experts to utilize their collective wisdom, knowledge and perspective to get the job done right.

Monday-Friday: 8am to 5pm